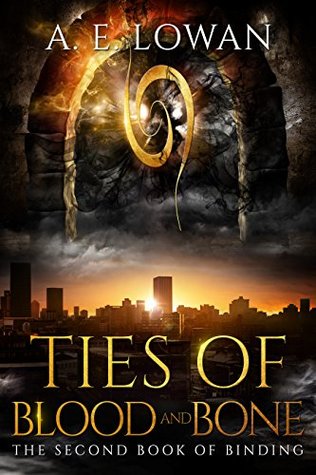 Ties of Blood and Bone

This story begins shortly after the previous one ended, and it introduces a slew of new characters. There’s a little bit more romance in this than in the previous book, and while it’s important to the story, it’s not really the focus. It’s good to see though, as it’s a little point of light where things are otherwise pretty grim.

The plot revolves around how the main character, Winter Mulcahy, needs to die in order for a sorcerer to fulfill a geas laid on them. If the sorcerer doesn’t kill Winter, a demon will eat their soul. It’s a dark story, and while there’s some gruesome violence, it mostly happens off-screen, and the reader is only shown the aftermath. There’s no wallowing in gory details.

The point of view often shifts from one character to another between paragraphs and without warning. Mostly this is done really well, and it’s clear that it’s happening, but on a few occasions it misses the mark and ends up getting confusing.

Rabbit shifters. I’ve known Lowan for a while, and they’ve often mentioned they have therian rabbits in their story. I’ve always thought about them as being some kind of cutesy comic relief characters – bunny shifters, you know.

Turns out I’m wrong. Turns out you can make therian rabbits into something rather bleak and heart-wrenching.

The setting. The world shown in the story is very rich, and there are more preternatural elements than you can shake a stick at. The rabbits mentioned above is just one aspect of it. It’s almost all dark, but that doesn’t mean there aren’t points of light speckled throughout.

The relationships. I won’t be going into details about this, as there are potential spoilers for the previous book here, but let’s just say that it’s good. There are a lot of aspects that don’t seem to be common to the genre.

This is a slightly darker, more mature take on Urban Fantasy, and if that intrigues you, I’d strongly recommend having a look at this.

Find Ties of Blood and Bone on Goodreads