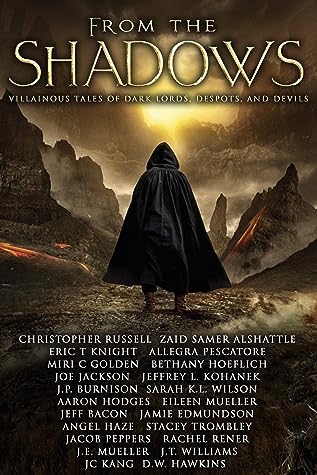 From the Shadows: Villainous Tales of Dark Lords, Despots, and Devils

Authors listed at end of review.

I don’t believe I have.

An anthology like this is a great way of exploring the concept of villainy a little bit deeper. Even when the characters are, including by their own admission, horrible people, the story is still told from their point of view, and they’re still the main character. The hero, if you will. It brings them a little bit closer, and makes them more real.

In many of the stories, the main characters don’t necessarily feel evil, even though they would very clearly be villainous monsters in the story of someone else.
They’re people (well, more or less), doing their thing, for their own reasons. Sure, their reasons may not be ones I agree with or relate to, but they are reasons. These people aren’t evil for the sake of being evil – it’s just a means to an end, and by seeing the story from their point of view, it’s a little bit easier to understand them and justify their actions.

For example (and I’ll only give one example or I’d be here all night), there’s a story about the how the Son of Darkness is due to fight the Chosen of the Light, told from the side of the bad guy (that’s the SoD, just to be clear).

Apart from the little detail about how Really Bad Things tend to happen around him in more or less mysterious ways, he seems to be a pretty nice guy. The Chosen of the Light however, is a proper twat.

So what’s good and what’s bad about this anthology – and I don’t mean the villains (duh, seriously…).

This will seem a bit silly, but I had expected the stories to be shorter. Sure, not all of them are very long, but overall, the book is a lot chonkier than I thought it would be, and it took me aback when I realized. My kindle listed the reading time as above twelve hours.

I’d thought I’d breeze through this in an afternoon or two, but that was not the case. Way to foil my plans, villains.

This book is one mean, massive bastard of a tome. It’s kind of fitting that the print version could be used as a bludgeoning weapon (I’ve seen pictures).
Much as I just complained that it was too long, I also enjoyed that, once I’d gotten used to the idea. It lets the stories be rich enough to really suck me in, and it builds up that need to stay in the story’s world and learn more about it. That otherworldly feeling of homeness you really only get from escaping into a solid fantasy world.

I should probably mention that not all stories were to my taste, but I don’t feel like that’s a reasonable complaint. There are twenty one stories by a bunch of different authors, and they’re not all going to cater to me. This isn’t to say the stories I didn’t enjoy were bad – just that they weren’t for me.

On the whole, the quality of writing and storytelling is excellent throughout.

This is good stuff. I’m already familiar with some of the authors, and many of them have been on my radar for some time. Reading their stories here has strengthened my resolve to check out their other works in the near future.

As such, this is a great way to discover new authors to read.

I received a free ARC, and was informed an honest review would be appreciated, but not required. I also know some of the authors involved with the book – horrible, twisted lunatics though they be.

Find From the Shadows on Goodreads.

Book Review: Of Honey and Wildfires