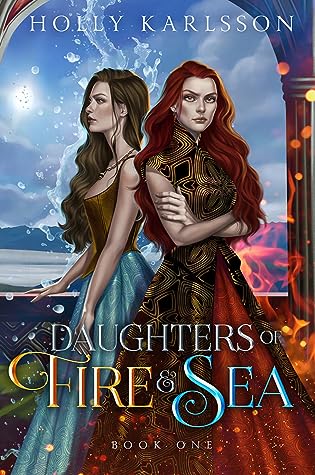 I don’t remember quite what I expected when I picked this up, but I’m pretty sure it wasn’t what I got – which isn’t a bad thing.

This isn’t just a story about two sisters going on an adventure. Rather, it’s about the relationship between the two sisters, and the strains that being thrown into an adventure puts on it, and I really enjoyed that. Obviously, the adventure is there too – and everything else that comes along with it – and that’s not to be forgotten, but it’s the sisters that matter.

After the first chapter, it took a while for the story to get going.

There were a few times, in situations that felt really tense and exciting, where the characters spent way too much time talking about what they were going to do instead of getting on with it. It’s in the nature of the characters, but it stressed me out because I wanted to know what was going to happen.

The sisters and their relation to each other. They’re twins, but they’re still very different personalities. At the same time, they’re both struggling with the same set of problems, with and without the knowledge of the other. It fascinating.

The world. This feels like a world steeped in magic and wonder, even if not all of it is visible all of the time. The parts we’re shown through a lot of the story may be bleak and imposing, but the feel of the setting as a whole is very colorful.

Naming a character Lyric has to be some kind of stroke of genius. It makes me happy just to read her name.

The first chapter. This hooked me hard. Two sisters living alone in a cabin, except one of them happens to be dead, which is really annoying, because it means all the villagers are afraid of both of them (okay, that’s overly simplified, but it was enough of a setup to pull me so deep into the story that the only way out was through).

This is well worth checking out.